Money has no place in a fair and effective pretrial system.

Bail is a pretrial practice where defendants, who still ought to be presumed innocent, are obliged to pay in order to sustain their liberty. While this was intended to ensure that defendants show up for court, it has become a system which keeps poor people in jail who don’t need to be in jail and allows rich offenders go free even when they pose a risk to public safety. Pretrial incarceration decisions should be made on the basis of public safety, not financial situation.

Even those who can afford bail experience negative consequences from this system, as it leads to needless incarceration from arrest until bail arrangements can be made. Studies have shown that even a few days of pretrial detention increases the risk of those incarcerated committing additional crimes and adopting criminal lifestyles. This time wasted in jail can cause people to lose their jobs, a crucial protective factor which helps people stay away from crime, and instead fosters ties with others involved in criminal behavior. We don’t want people in jail who aren’t a risk, even for brief stints.

Virginia is already starting to move away from bail.

Criminal justice leaders in Virginia have started to recognize the injustice inherent in bail, and are already starting to move away from its use. In a letter addressed to the Virginia State Crime Commission, Attorney General Mark Herring urged reform of Virginia’s cash bail system. Herring looking to shift bail decisions away from wealth, saying, “Virginia’s current system of cash bail too often determines who has money, not who is dangerous, and we can’t have a justice system that determines fairness and freedom based on wealth and means.” He highlighted the viability of alternatives to cash bail by articulating the $82 a day savings the government gets for putting someone on pretrial services instead of incarceration.

More recently, the Commonwealth’s Attorney for the City of Alexandria, Bryan Porter, said his assistants will stop recommending cash bail in any misdemeanor charge and start recommending release on personal recognizance with pretrial supervision unless there is a evidence the accused is a danger or a flight risk. Porter supported this reasoning by saying  “There is no reason why an accused citizen should be required to post a cash bond for a low-level, non-violent offense.”

Eliminating money bail will reduce disparities in how rich and poor defendants are treated by our criminal justice system. It’s also a path to reducing the excessive use of pretrial incarceration, which violates the traditional principle of innocent until proven guilty.

The use of incarceration pretrial has grown immensely over the last few decades. 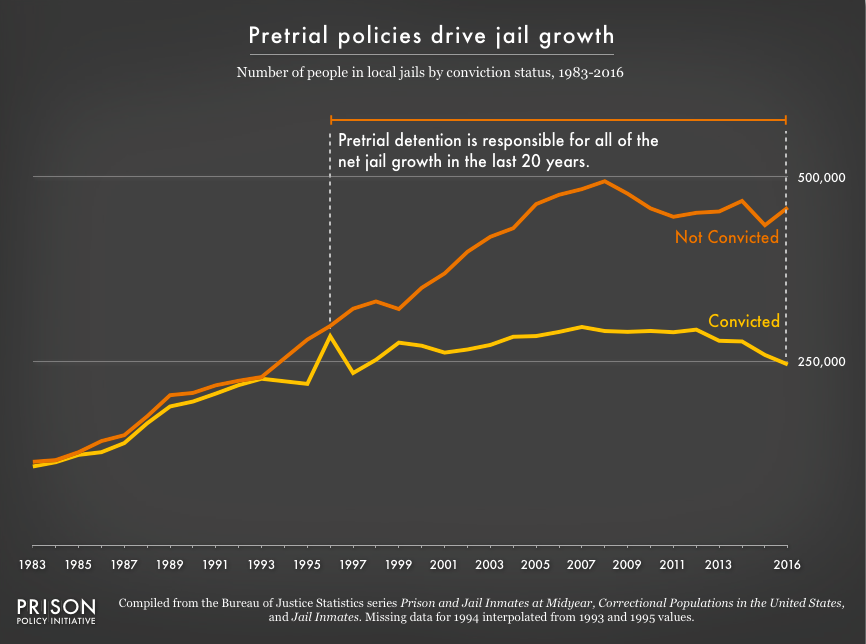 We need this data to ensure we are accomplishing goals of improving equity, reducing pretrial incarceration, and improving public safety. Surprisingly, Virginia doesn’t have a centralized reporting process for pretrial agencies. We really don’t have a good sense of how our pretrial agencies are performing. Collecting this data will increase accountability and facilitate further improvement in Virginia’s pretrial practices regardless of what future steps are taken on bail reform.

In the 2019 session of the Virginia General Assembly, we’re supporting SB 1687, which authorizes and funds the Department of Criminal Justice Services to collect data on bail and pretrial incarceration and submit an annual report on the data.

How much will it cost?

Like all evaluation and reporting processes, there are costs involved. The Department of Planning and Budget estimates this data collection process will cost $1,000,000 upfront and then $500,000 per year (Department of Planning and Budget, 2019). Jails in Virginia spend an average of $31,000 per year for each person they incarcerate. (Virginia Compensation Board, 2014) If we can even minimally reduce pretrial incarceration, and empty just 47 beds across Virginia, this data collection project will have paid for itself. The costs of this study are trivial compared with the potential savings to Virginia localities.

This bill needs your support! As of January 21st, 2019, the House Courts of Justice subcommittee has recommended killing the bill. However, it is still before the Senate Committee for Courts of Justice, chaired by our very own Senator Obenshein. Please send an email to all of the members of this committee.

Some of us are attending Pretrial Innovators Conference on March 13-15. Interested in joining us? Contact us! We may be able to pay some of the costs.